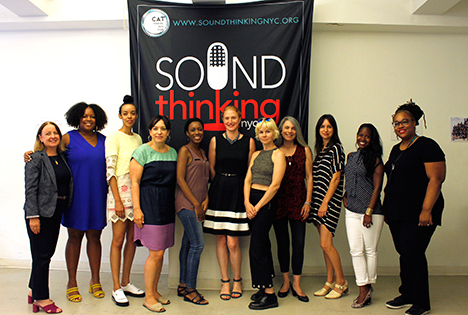 A pilot program launched by New York City's Mayor's Office of Media and Entertainment (MOME), City University of New York's Creative Arts Team and non-profit NY Is Music is aiming to address the gender disparity in the music industry.

Together, the organizations have founded Sound Thinking NYC, a free education and career path program for young women in 11th and 12th grade who are interested in careers in music. The inaugural three-week program, which runs through July 27, introduces the students to music production, audio technology and sound recording.

The summer curriculum involves hands-on recording workshops using ProTools; field trips to music studios and industry offices; and leadership sessions and panel discussions with women professionals in the music industry. The 40 students in the program went on their first field trip July 9 to visit Rebecca Huston, head audio engineer at Brooklyn's Sunnyvale music venue, where they learned about sound for live music, followed by a July 13 panel with eight women in the music industry, including Songtrust's Molly Neuman; Okayplayer and OkayAfrica editor-in-chief Rachel Hislop; and Carletta Higginson, head of music publishing business development in North America for YouTube and Google Play Music.

A high school career day in Brooklyn, New York inspired Downtown Music Publishing CEO Justin Kalifowitz to help launch Sound Thinking, following the 2014 bow of NY Is Music, a coalition of businesses and organizations devoted to advancing New York's music industry. "The kids were not particularly enthused and I got up there and started talking about the music business, and not only my job, but all of the other jobs that exist behind the scenes," Kalifowitz tells Billboard. "I watched the kids' eyes light up. I probably spent an hour and a half answering questions. These were all high school juniors, seniors."

Founding NY is Music -- which, in partnership with the MOME, launched the first-ever New York Music Month last June -- originally led Kalifowitz to ask, "This is such a great music industry, we have so many great resources, what can we do to improve music education in public schools? Not just performance, but also using music as a catalyst perhaps to engage people in discussions about their future and discussions about careers." Of late, he says, the question has been specifically how to engage women. In January, the University of Southern California's Annenberg School for Communication and Journalism conducted an inclusion study of the music industry and found that only 22.4 percent of artists, 12.3 percent of songwriters and 2 percent of producers were women.

With the MOME's programs allotting New Yorkers frequent opportunities to work in various entertainment departments, leveling the playing field is a key goal within Sound Thinking's mission. "We're really excited about Sound Thinking because there is a real underrepresentation of women, specifically in fields regarding music production, audio technology and sound recording," MOME commissioner Julie Menin tells Billboard. "We think it's a great way to incubate that talent, which will create a real pipeline of women entering into the field."

The city-funded, competitive program received 85 applications for this inaugural year, which asked for essays about the girls' relationship to music, family history and thoughts on gender disparity, as well as two letters of recommendation and their high school transcripts.

"We wanted to know their transcripts and their grades to give us a picture of them, but we weren't necessarily looking for the A students," says Dr. Jeanne Houck, executive director of the Creative Arts Team at CUNY, who runs the program. "But the primary thing that we were looking for in the applicants was that they had a passion about learning more and demonstrated in their essays and answers that they could commit to exploring the world of music."

The 40 students enrolled in this summer's intensive program represent all five boroughs of New York. "We have a diverse group of women from different ethnic backgrounds, different socioeconomic backgrounds," says Ah-Keisha McCants, project director for Sound Thinking NYC. "They're showing so much love and respect to one another." McCants and Houck hope to expand operations to two camps next summer, with 50 students each. They expect a further 100 students for the following summer of 2020, making 250 students the total outreach goal of Sound Thinking NYC in its first three years.

In addition to the technical skills, Menin stresses that the students are also learning camaraderie, leadership skills and self-discipline during the workshops. Furthermore, Menin adds that the instruction doesn't stop once the summer program ends. "We marry that with the concept of free workshops during the 11th and 12th grade school year, the fact that they can apply to paid summer internships, they can apply to take free CUNY credit courses during their senior year of high school," she says. "So we really have focused on a number of different ways to continue that exposure and that training."