For three years Mrs. Butcher taught me how to read and play standard American and classical music on guitar. We would play duets; she would stress technique, work on basic chords, distinct rhythms and fingering in the first position. Through that process I became more comfortable with music on the page, and it opened up my ear. I began distinguishing different instruments and their function in a song. I also discovered endless possibilities to enhance a tune or the mood of a song. Like any art-form studying music requires a lot more individual discipline than one can ever imagine. Today the passion to pursue playing an instrument can be easily distracted by convenient technology, social media and thousands of channels of entertainment, however, there are more opportunities and tons of outlets to learn online and for free. Now everything, old and new, is at your fingertips. Take advantage.

When I think back, I realize now, I just happened to grow up in a very heavy musical era—full of Jazz, R&B, Motown, Rock and Roll playing on the radio, musical variety shows, as well as on sitcoms on television. The influence to play an instrument was everywhere. We watched The Partridge family on TV every week after school—they were a family band that performed and recorded music. There were tons of musical family groups. The Jackson five had a cartoon and variety show and so did the Osmond brothers. There were music families like, The King family, The Pointer Sisters, The Isley Brothers, The Doobie brothers, The Carpenters, The BeeGees, and Sister Sledge to name a few. We would watch American Band Stand and Soul Train showcase popular recording artists. The Monkeys had a Saturday morning TV show and there were the Midnight Special concerts with Wolf-man Jack. The Beatles put out films like the Yellow Submarine and musical movies were popular. Good music was everywhere and music was also the thing to do.

As a teenager in the 70s I became more introverted but still very curious about playing popular music. At that time the highest form of technology was a television and radio with limited channels (only seven channels). There were no computers, internet, cell phones, drum machines, CDs. Big bands were everywhere. Although I took music lessons I still had to learn how to play with other people besides Mrs. Butcher. That’s an art in and of itself. Playing with other musicians is grounded in the art of effective communication, listening and responding. With this skill comes a balance between personalities and instruments, as well as the negotiation of rhythm, volume, texture, melody and harmony together. Music is a contact-sport that yields great satisfaction as you become better in relation to your instrument and performing.

One day I was playing basketball with a guy named Jeffrey. He had a big afro and beady eyes and wore a sleeveless jean jacket with a gang logo on the back that read, “The Tomahawks”. He mentioned he bought a Fender precision bass guitar. We instantly became friends expanding from our love of basketball to our dreams of becoming famous musicians. Other than practicing and eventually playing with Jeffrey the only thing missing for me was the experience of playing in a band.

Jeffrey and I would exchange albums, playing records on what was called a record player (turntable). We would copy what we heard by slowing down the record with our fingers and transcribing it note for note, then practice for speed. Jeffrey and I would spend hours practicing songs by Earth Wind and Fire, Herbie Hancock, Stevie Wonder, The Ohio Players and Sly and the Family Stone.

Funk was the sound seeping into popular music during the mid-seventies. James Brown, the godfather of soul, laid the foundation. As bass and guitar players we were challenged to play this very heavy percussive music demanding rhythmic patterns that groove inside “the pocket” (all musicians locked into a steady groove). Playing popular music was another way to dance and interact with sound to enhance the lyrics. This was during a time that produced Fusion; a merge between jazz, funk and rock, well known by the band “Return to Forever”. Jeffrey and I considered our two-person band revolutionary. He studied with a teacher named Greg in the back of a Pharmacy on Utica Avenue in Brooklyn. I was about 13 when I talked my mother into allowing me to take lessons with him, too.

Greg was a tall sleepy-eyed black guy with a lopsided afro and beard. I didn’t know much about him and don’t remember his last name but he was a jazz/blues/fusion guitarist who introduced me to Wes Montgomery, Pat Martino, John McLachlan, Jaco, BB King, George Benson and Jimi Hendrix. Not only did he introduce me to listening to recorded music but how to listen to myself. One of the greatest things you can discover is your own sound. Jeffrey was two years older than I was and got left back twice. By the time I went to South Shore High School he dropped out and joined the army. That’s when I met these two brothers that were musicians. Thaddeus played bass and Dwight played drums. I would go over their house almost every day to play guitar in their basement. We did not play in the school band or any formal ensembles but learned songs that were popular on the radio. That’s when I started copying all George Benson’s songs from his Breezin album.

One Saturday there was man by the name of Levi who came to our rehearsal. He was a big burly, dark man with a big mustache, big hat and hard shoes. He was impressed with how we played Breezin after hearing us at a block party around the corner. Levi was a club promotor who had a girl group and a piano player that he used for the events. He wanted to manage us and we agreed, so he combined his group with ours. Our band was called Universal Sound, comprised of teenagers between the ages of 14 to 17. I’m sure it was illegal but we were playing all over the New York City, in clubs, bars, block parties and private events and getting paid very little to hone our craft, but what did we know? 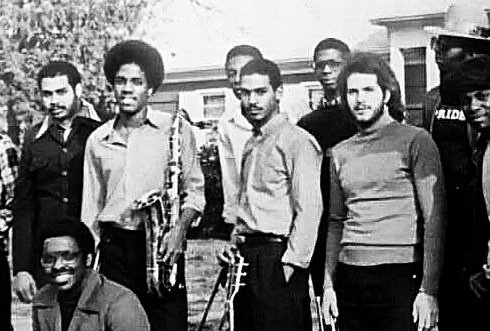 That was called paying dues, working musicians developing our skills in a band. Since relationships are the network of life we grow faster in community than in isolation. However without the passion to stay the course you will never experience what I call “the zone”, that place where the members of a band start to read each other’s minds and elevate to places they have never gone before, in a spontaneous flight. That’s what eventually started to happen with Universal Sound. We would come to rehearsal with the same ideas or play something new at the very same time or anticipate notes, chords and riffs. Those were great days of discovery.

Our musical identity is crucial to our journey in finding our place between the notes. Most artists are critical of themselves which can either drive a person’s desire to get better or quit. Once you can accept your uniqueness you have to learn how to love it. I believe that is the healthiest way to make art—learning to fall in love with your own sound and develop it.  Whatever activities we engage in has an effect on our body, mind and spirit and it shapes our worldview and self-perspective. Since music produces energy, which is contagious, playing for an audience is the best way to develop your sound and gain a following. Now that I have a signature, a sound, a voice that is truly mine I write and listen to music so that I can learn to play what I love and discover more about who I am in the human experience.