CAT has a strong history of international collaborations, including: 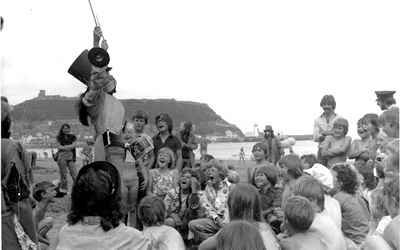 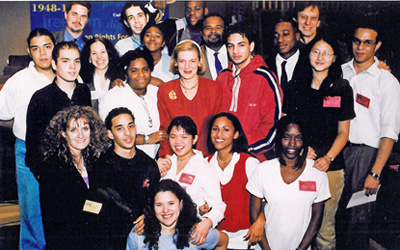 In August 2021, the CAT Youth Theatre piloted a Youth Theatre International Exchange Project (Global Theatre Makers) between Leeds Playhouse (UK) and CAT Youth Theatre. The idea for the project grew out of a 3-year multi-arts organization project across Yorkshire and New York City funded by the Burberry Foundation. To read more about the 2019 - 2022 Burberry Inspire Project, click here.

Global Theatre Makers was a weeklong project on Zoom. High school aged articipants from both groups learned about how the other group works, shared different practices as theatre makers, and celebrated getting to work with other young people across the ocean. They participated in theatre games and activities, shared popular songs and cultural traditions, devised original theatre together, and identified that they learned more about each other's lives and cultures.

Participants were asked what they learned or discovered during the project and shared: 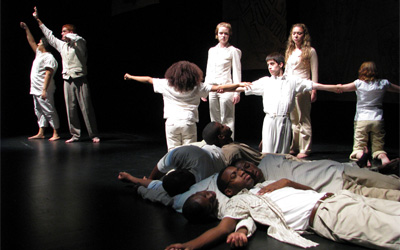 In 2007-2008, CAT Youth Theatre was the first American company, and one of 12 organizations worldwide, selected to participate in the prestigious international Contacting the World Festival in Liverpool, England.  The program is organized by Contact Theatre, a leading British youth theatre.

The 10-month experience involved an overseas partnership with Project Phakama, a youth theatre company in London and culminated in July 2008 when a cohort of CYT members traveled to Liverpool, England to perform their original production, In the Shadows, for an international audience.

The experience changed the lives and perspectives of the young people who participated on levels both large and small.  They made (and remain in touch with) many new friends.  They were exposed to many different kinds of theatre.  Some had never flown in an airplane before; others, who share bedrooms at home, enjoyed the single dorm rooms in Liverpool; others enjoyed the packed schedule and opportunities to dine in restaurants.

But most importantly, they had the opportunity to meet, get to know and work with other young people from all over the world. 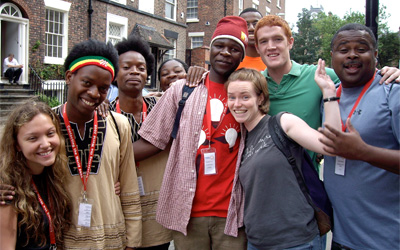 They got to challenge their own preconceptions and expectations, and learned - first hand - about many other countries and cultures.

The Youth Theatre companies were from the UK, Germany, Poland, Turkey, Brazil, Nepal, India, Palestine, Zambia and CAT from the USA.

A generous anonymous donor made a challenge grant – and hundreds of people responded – to make this experience possible.  CAT is grateful for all of their support. 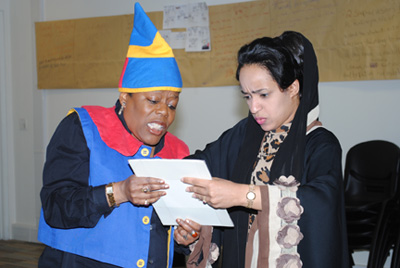 2011-2012 Update: A cohort of UAEU Graduates returned in 2011, for an intensive Applied Theatre Certificate program. In 2012, Lynda Zimmerman, Helen Wheelock and Gwendolen Hardwick traveled to the UAE to lead workshops and participate in an award program.

2008 - 2010: In July 2010, for the second consecutive summer, CAT hosted a group of young professional women from the United Arab Emirates for a whirlwind, two-week living and learning experience. 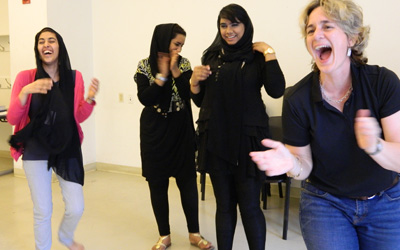 The students experienced 40 hours of hands-on workshops led by CAT’s senior staff and guest artists and took in a full, Citywide schedule of museum visits, sports events, and cultural performances.  They also met a range of successful female New Yorkers who may become role models for a nation where women’s roles are rapidly evolving. 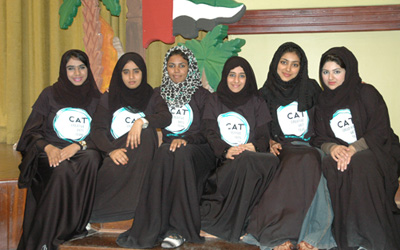 “We at UAEU are delighted that the partnership with CUNY and CAT continued this summer.  Last year’s participants told me the visit to New York ‘changed their lives,’” said Dr. James Mirrione, Associate Professor and Arts Coordinator at UAEU and a CAT co-founder.  “All of us express our gratitude to Her Excellency Hoda Al Khamis Kanoo, Founder and Artistic Director of the Abu Dhabi Music and Arts Foundation (ADMAF), whose generous support continues to make the partnership possible.”

This trip represented the third CUNY/CAT/UAEU exchange.  The partnership began in 2008 with a visit to UAEU by two CAT teaching artists and continued in 2009 with a two-week summer residency at CAT by 12 UAEU students.

A three-year collaborative project supported by the United States Department of State, Bureau of Educational and Cultural Affairs (formerly the US Information Agency).  CAT artists collaborated with Palestinian, Jordanian and Israeli actors to create a play with a message tolerance and peace.  They toured the play to Arab and Israeli schools and youth centers and presented a culminating performance for an audience of dignitaries and invited guests at the United Nations in New York City. 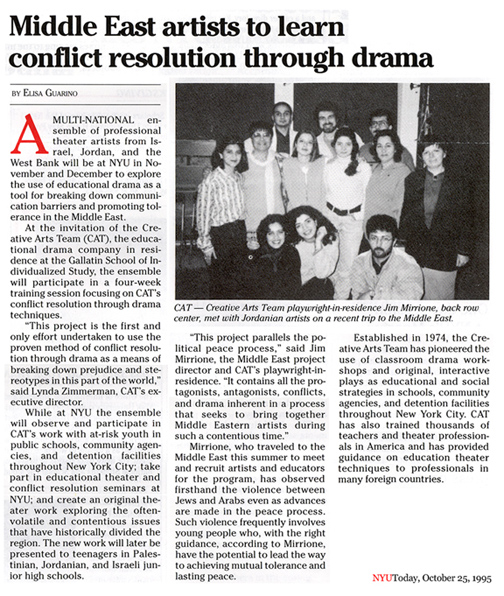 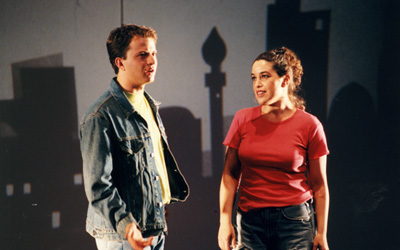 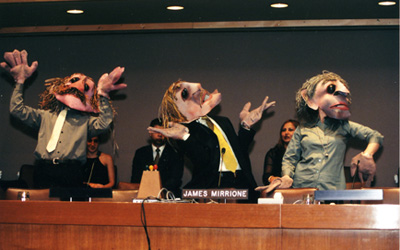 In October, 2011, Gwendolen Hardwick traveled to Barbados to lead a series of workshops during the Barbados Association of Drama Educators (BADE) Retreat. Participants focused on bullying and HIV/AIDS during workshops entitled: "Addressing Social/Curriculum Issues Through the Use of Drama." 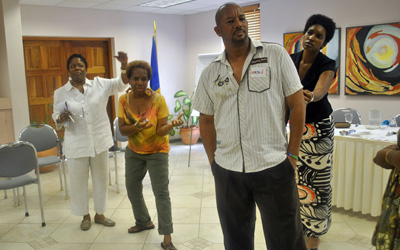 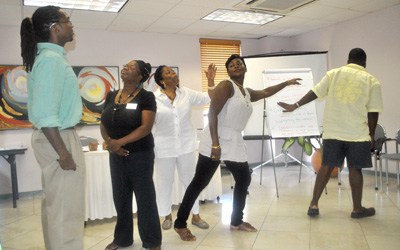 In 2011, Helen Wheelock partnered with the World Wide Orphans Academy in Ethiopia as a guest teaching artist. 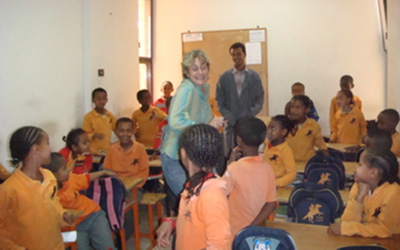 Goals of the project:

At the Academy, Helen provided:

The MA in Applied Theatre has a partnership with the Kigali Institute of Education in Rwanda, ongoing since the summer of 2010. For more about this collaboration, click here. 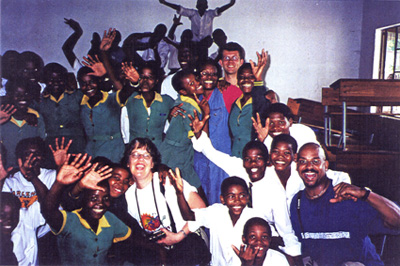 The Bilateral Educational Support through Theatre (BEST) Project was a partnership with four South African universities. With funding from the US Department of State, CAT collaborated with South African educators, artists and healthcare workers to offer training that would help address pressing community health and wellness issues. 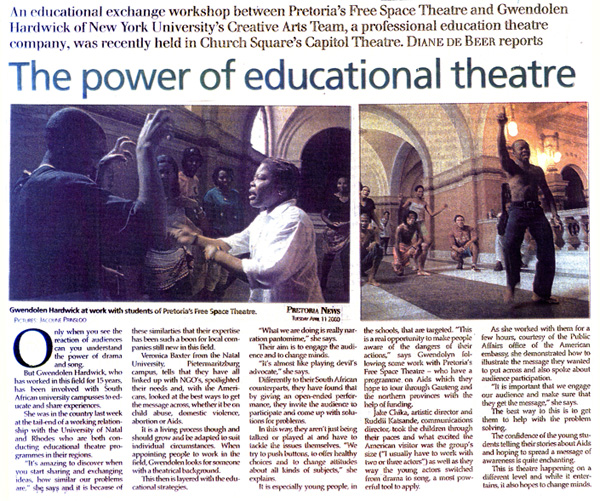 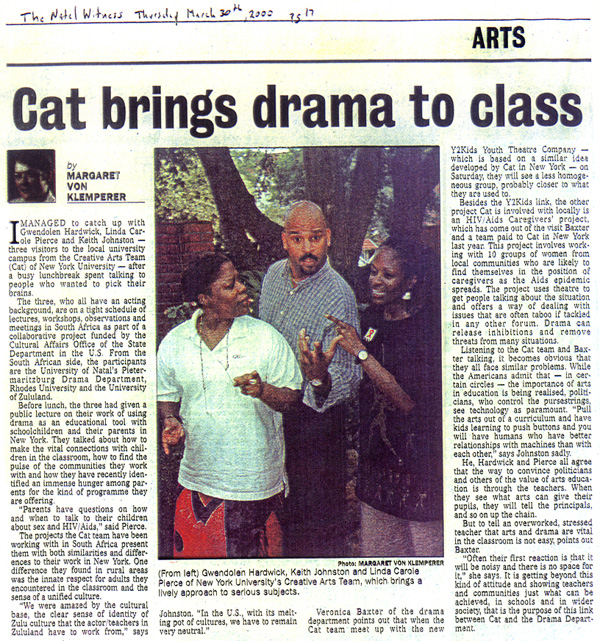 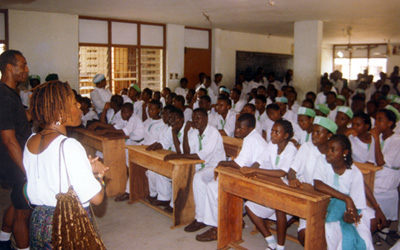 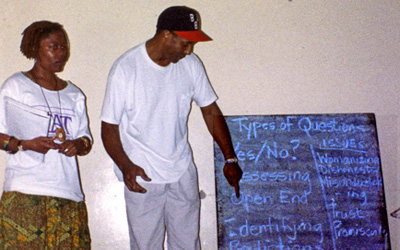 The Society of Children's Theatre Works and Community Development in the Kyushu-Okinawa region brought CAT to Japan to introduce the concept of educational theatre. The goal was to seed future training programs in theatre-in-education and youth theatre processes. 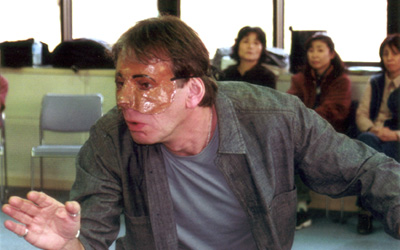