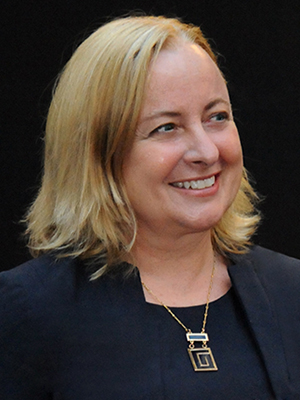 We are pleased to announce that Dr. Jeanne Houck has been named Executive Director of the Creative Arts Team at CUNY, succeeding CAT’s founder Lynda Zimmerman, who is retiring from the position after 42 years of leading CAT. Jeanne comes to CAT with 24 years of experience in development and management in the arts and culture field. With a strong background in fundraising, Jeanne’s career includes a lifelong dedication and commitment to organizations and projects that focus on the arts and social change.

On starting her work at CAT, Jeanne has said that she will “carry forward the team’s already tremendous impact in using drama to transform lives by building on existing relationships and fostering new partnerships within the CUNY community and with New Yorkers from the five boroughs, as well as national and international audiences.”

Most recently, Jeanne held the position of Director of Foundation Relations and Grants at the Intrepid Sea, Air & Space Museum. Prior to that, she served as the Director of Individual Giving for the Museum. She has been a longtime board member and current chair of the board of trustees for Waterwell, a New York City theatre company with a drama education program for public middle and high school students at the Professional Performing Arts School (PPAS). In 2017, Jeanne acted as associate producer for the musical Blueprint Specials, a Waterwell production premiered as part of the Public’s Under the Radar Festival in association with the Intrepid Museum.

After receiving her Ph.D. in history from New York University, Jeanne specialized in U.S. social, cultural and urban history. Her academic work has included teaching undergraduate and graduate courses at The New School and at Pratt Institute as well publishing  - most recently her review of Hamilton was featured in The American Historian magazine. She served as Executive Director of the Abraham Lincoln Brigade Archives (ALBA), an organization dedicated to preserving the history of American volunteer activists in the Spanish Civil War (1936-39). Jeanne’s background includes expertise in filmmaking, new media production and public programming linked to education. As a filmmaker, she worked with Ric Burns on the New York series and her credits as an executive producer for documentary films include Miss America (premiered at Sundance and broadcast on PBS in 2002) and No Job for a Woman: the Women who Fought to Report WWII (2011). As a public programmer, she has been a producer and curator of a series of national documentary screening and discussion programs funded by the National Endowment for the Humanities.